About Friends of Rocky Prairie

Friends of Rocky Prairie is an all-volunteer group of homeowners, business owners, and residents in Thurston County, Washington (including the communities of Maytown and Tenino), concerned about preserving the rural character and unique prairie habitat in south Thurston County.

What is Rocky Prairie

Rocky Prairie is a 745-acre parcel of land located 13 miles south of Olympia, 1/3 mile from Deep Lake, the home of historic Millersylvania State Park, and next to the Washington State Department of Fish and Wildlife's 800-acre West Rocky Prairie Wildlife Area. 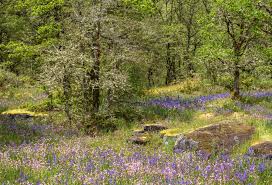 On Wednesday morning, April 15, 2020 the Thurston County Commissioners, led by Tye Menser and John Hutchings, voted not to docket the NorthPoint-requested rezone of Rocky Prairie. (While the third commissioner, Gary Edwards, voted in favor of the rezone request initially and argued against the others for quite some time, he eventually decided to change his vote so that the decision was unanimous.)

Update Feb 15, 2021: After nearly a year of extensions, NorthPoint has backed out of their purchase and sale agreement with the Port of Tacoma.

A big thank you to all of you, our supporters who helped achieve this step.  However our fight is not over, the land still needs permanent protection from development.

The current owner of Rocky Prairie, the Port of Tacoma, was working with a Missouri company, NorthPoint, to develop a massive intermodal (truck & train) industrial cargo center on Rocky Prairie.  The reported 6,000,000 square feet of NorthPoint warehousing would be one of the largest in the northwest.  With a facility this massive we can expect 24 hour truck and train traffic with thousands of trucks per day clogging area streets and highways from Maytown to Lacey. It will also light-up the skies for miles around, fill the air with noise and pollution, and disrupt or destroy the sensitive balance of nature in the area.  6,000,000 square feet is the equivalent of 104 football fields for the building and many more of paved impervious surface.  All of this right next to sensitive West Rocky Prairie Wildlife Area and Millersylvania State Park. This is no place for an industrial hub!

The Port of Tacoma and the buyer, NorthPoint, wanted to rezone the entire parcel to Industrial.

Rocky Prairie forms one of the rarest habitats in the world. There are only 20 sites in the world that contain Native Outwash Prairie and only 5 are considered in good condition; this site is one of them.  The prairie also lies within the important Black River watershed, an area that agency and organizational partners have been working for years to protect. Rocky Prairie also forms the headwaters for two salmon-bearing streams running through it, and its hydrology is important to hundreds of residents living nearby.

This area has an extremely high water table and is a critical aquifer. Impervious development and polluting truck/train traffic would threaten not only the endangered Oregon-spotted Frog and its sensitive wetlands, but also compromise the aquifer, the integrity of the neighboring West Rocky Prairie Wildlife Area and Millersylvania State Park (and their threatened species and priority habitat), as well as impact area wells.

WDFW's West Rocky Prairie Wildlife Area includes Federally Threatened species, State Priority Species, Mima Mounds, and oak and native outwash prairie ecosystems. The proposed site is slightly southeast of the nearby historic and popular Millersylvania State Park and abuts West Rocky Prairie Wildlife Area. It is no place for an industrial hub of any size much less one of the largest in the northwest.