The site of the proposed massive NorthPoint Industrial Center is located 13 miles south of Olympia, Washington, closest to Maytown and between Scott Lake and Tenino -- each within a mile or two as the crow flies. Currently, the only entrance is at 13120 Tilley Road SW. It consists of 745 acres of undeveloped land in the Black River Watershed. Historic Millersylvania State Park and Deep Lake are less than a half mile away. Right next to the site is the West Rocky Prairie Wildlife Area, a preserve owned by the Washington State Department of Fish and Wildlife.

The property has access to two rail lines. One, running north/south is just east of the site and operated by Burlington Northern Sante Fe (BSNF). The other, rarely used in the past, was owned by Tacoma (TRMD) and is now Rainier Rail; its track runs east/west through wetlands on the property’s northern border.

The map, below, shows the WA Department of Fish and Wildlife (WDFW) West Rocky Prairie Wildlife Area (beige shaded area). The large area immediately above the WDFW property, including the large section north of the rail tracks, belongs to the Port of Tacoma and is in the process of being sold to NorthPoint for development into a massive industrial center.

Below is an aerial view of the 745-acre Port of Tacoma property with the proposed site of the Industrial Center (yellow highlights the border). 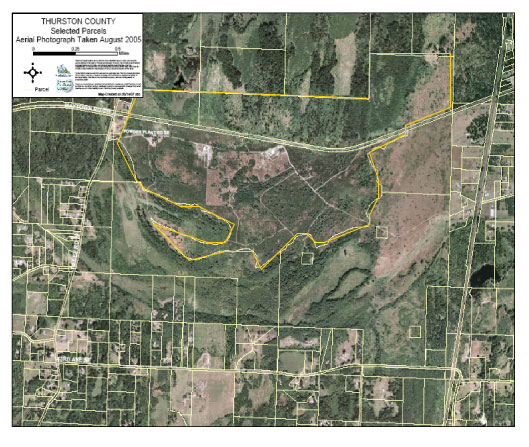 For a larger more detailed map of the proposed site and the surrounding parks and wildlife areas see page 2 of our fact sheet, click here.